Head out of Porto into the charming Minho region, discover Peneda Gerês National Park and venture into the mountains beyond, before dipping south to immerse yourself in UNESCO World Heritage culture. 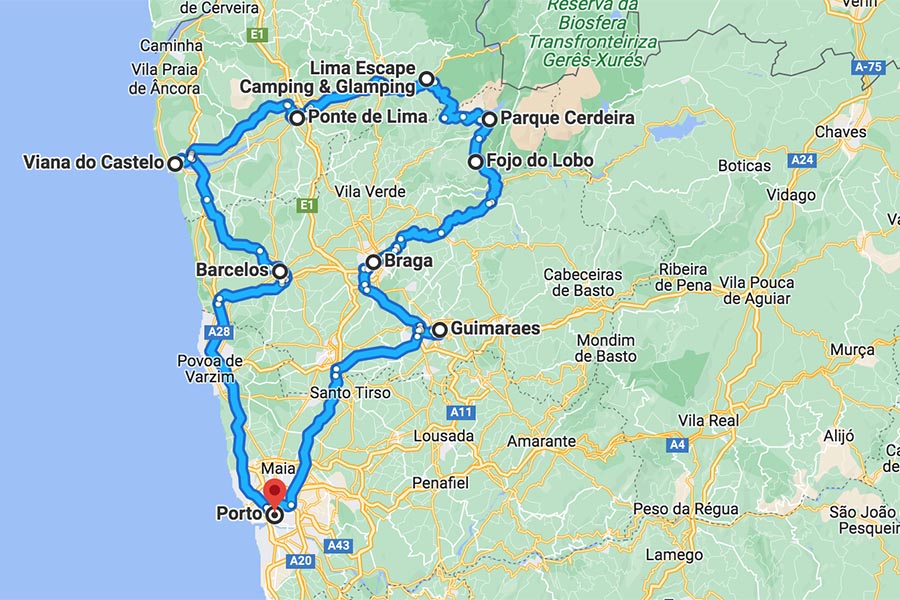 This loop can be done in either direction. Total Driving Time: 8h 54m

The drive north, out the urban sprawl of Porto, hugs the Atlantic coastline until swerving inland along the Cávado River. From there cross the medieval bridge into the iconic town of Barcelos.

Park up, hop out of the van and discover this historic town on foot. Wander through the streets and gardens in search of medieval monuments and see if you can spot the famous Galo de Barcelos (Barcelos Cockerel), now a symbol of Portugal around the world. Enjoy a quick bite with some sweeping river views, or plop yourself down for a drink in an ancient square.  If you’re lucky to arrive on a Thursday, find a bargain in Portugal’s oldest weekly market (dating from 1412), held in the Campo da República.

The coastal city of Viana do Castelo now calls, with its sweeping views over the mouth of the River Lima and south down the Atlantic coastline. Looming on a hill above the city, the stunning Sanctuary of Santa Luzia can be reached with the 650-metre funicular ride. Back down in the city centre the ancient and monument-rich Praça da Républica is its historical and cultural hub. Take a stroll along the shopping streets radiating from here to know the charms of Viana.

If you have time, drive out of the city to get some beach time in. Discover what lurks inside rock pools at Praia da Amorosa.

Following the River Lima, ever inland, our next stop is Ponte de Lima, Portugal’s oldest town, having received its charter in 1125. Developing around the Roman-Medieval bridge to which it owes its name, and influenced by the constant presence of water, this is a town of monuments, markets (fortnightly Monday riverfront market, Sunday handicraft and antique markets in the Paseo de Platanos) and fairs (the Feiras Novas, in September, Portugal’s largest folk fair). The first day ends at Lima Escape, the peaceful riverside campsite under the pines and gateway to the nature park.

Leaving the peace of Lima Escape our tour of the park begins with two typical villages, the first being Soajo. With its monumental granaries, granite block houses, granite-slabbed alleys, and quaint central square. An intro to the park’s waterfalls can be seen nearby. 20 minutes further Lindoso boasts an incredible 60 stone granaries, the icon of this region and more than any other village in Iberia. The village is dominated by its castle, the scene of many battles and legends.

Spain is approaching as we skirt the waters of the Alto-Lindoso Dam, with its incredible views. Cross the border and to experience a taste of Spain, you can make a quick detour to the village of Lobios, before turning back towards Portugal. On the way down stop off for a dip in the hot spring waters of Caldas de Lobios.

As you come back across the border, the Portela do Homem waterfall, is moments away and very photogenic. It has no parking so it is advisable to park up at the border and walk down the hill. Once finished, continue along for great mountain scenery, before turning off the road to head up to arguably the park’s most scenic waterfalls.

Retracing our steps, our next destination are the calm waters of the Cávado River, and the many river beaches and waterfront facilities. This river-lake area, dotted around with villages, has a unique resort feel to it. On our last stretch for the day, we follow the lake round, passing (or stopping off at) Portugal’s second most important religious sanctuary (after Fátima), the Basilica of Saint Benedict, before reaching your campsite for the night, Parque Cerdeira.

This morning the park bids us a dramatic farewell, beginning with the Vilarinho da Furna Dam, where you can park up and take in the magnitude of concrete engineering. The village of the same name lies in the watery depths, but can still be seen when water levels are low. 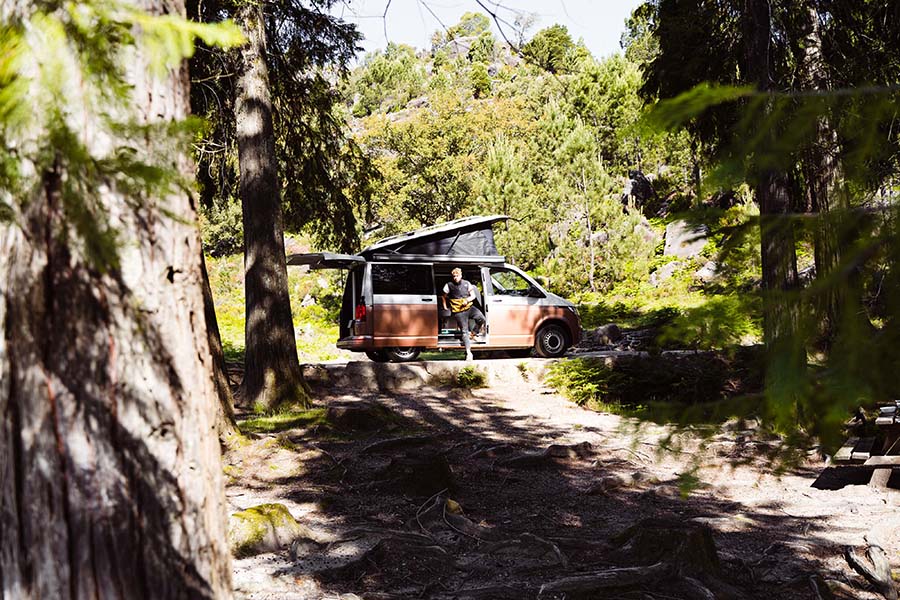 Follow the highland road, with amazing views on every side, watching out for wild Garrano ponies along the way before reaching the village of Brufe. Just before the village, O Abocanhado restaurant has views to die for. The winding journey with jaw-dropping views continues, back into the park, along cobbled roads, to the picturesque granite village of Germil. Don’t miss the intriguing Fojo do Lobo (wolf trap)  on your left as you leave the village.

It’s now time to leave the park bound for the culture of the city of Braga. Once you’ve settled in Camping Braga, the bustling city can easily be discovered on foot. Rich in historic, monumental and cultural interest, the city easily merits an afternoon and an evening wandering the maze of streets, alleys, and squares. With its sizeable student population, Braga is a young city, with a varied artistic, cultural and entertainment program, joined by a vibrant restaurant scene. We’ll save Braga’s most iconic attraction until tomorrow, so, for now, it’s time to soak up the city’s vibe. Must-sees include the Arco da Vila, Rua do Souto, Braga Cathedral, the Arcada, the Casa dos Crivos, the Jardim de Santa Bárbara and the Roman Baths, Biscainhos Museum. Check out this site for more ideas: Braga Cool

Today begins with the Bom Jesus do Monte Sanctuary, just outside Braga and recently elevated to UNESCO World Heritage status, for good reason. Get ready for an inspiring climb (on your knees if your a good pilgrim!), up the 581 steps of a series of three zigzagging baroque-style stairways, with their ornate chapels and fountains. If you aren’t up to it, take the oldest funicular in Iberia instead. Your reward at the top, the neoclassical basilica, beautiful grounds and amazing views over Braga.

Let’s get going for another historical city of great importance to Portugal, its birthplace. European Capital of Culture in 2012, Guimarães wows with its UNESCO status historic centre. Here, time turns back to the moment when Portugal came into being, and its first king, Afonso Henriques, made Guimarães the nation’s first capital. There is something unreal about strolling through its picturesque alleys and squares – its fairytale quality of age-old granite and city walls is almost overwhelming. Marvel at the ancient houses along the Rua Santa Maria, before spilling out onto the Largo da Oliveira. Pass under the arcades of the Old Council Chambers, to reach the Praça de São Tiago. Then head up to the Monte Latito, to discover the Palace of the Dukes of Braganza/Museum and the iconic 10th-century castle. For an adrenaline rush take the cable car up to Penha and enjoy a drink with views down over the city, as you contemplate the ride back to Porto.

Searching for a place to camp during winter that's warm, accessible and affordable? Check our our top 4 reasons to consider winter camping in Portugal.

Searching for the best campsites in Portugal? We’ve done the legwork for you. These are our personal recommendations for camping Portugal in 2022.

Your road trip in Portugal awaits!